The following blog is written by HSP 2014 student: 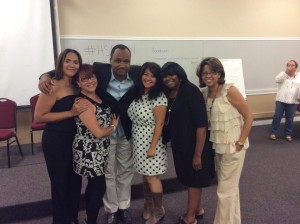 The Intersection of Academics and Action: A Reflection on Global Ethics

Thank you for giving me the space to share my thoughts on the Hispanic Summer Program (HSP).

I am entering my third year as a Masters in Theology student at Fresno Pacific Biblical Seminary and my ninth year on staff with a campus ministry.

I have to confess that writing a reflection on this incredible program is a bit challenging as I try to figure out what kind of action I can take regarding the recent “humanitarian crisis” of the 52,000 unaccompanied children from Central America.

That’s what I love about the HSP. Aside from the fact that we are taught by Latin@ professors across a range of experience and interests, we are taught by people who are passionate about what they teach and often have put action into practice.

Academics. This year, Dr. Eduardo Mendieta from SUNY-Stony Brook taught our Global Ethics class. Having his doctorate in Philosophy, Dr. Mendieta introduced us to key ethical theorists and their impact on society (reading original works by Aristotle, Kant, J.S. Mill, Dussel, Angela Davis, and Gloria Anzaldúa). This class deepened my appreciation for the history of moral theories and broadened my understanding of the “ethical.” Dussel’s liberation ethics was especially impacting.

Action. While we were studying in a gorgeous seminary, the nation was becoming alarmed by the influx of child migrants on the Texas border. I met one of them last July. He was a young teenager crossing alone, getting ready to board La Bestia – one of Mexico’s trains that migrants ride to get from one border to the next. His name was Reynaldo and he was crossing, “Por que tenemos hambre y quiero ayudar a mi mama.” Lest you think political agendas and cartel cronies are thwarting believers, shelters ranging in denominations and individuals ranging in backgrounds locate themselves at spots along La Bestia to help as much as they can. But it is not always enough to prevent the abuse and victimization the vulnerable migrants face.

Academy. Where is the academy located in times of crisis? If the Global Ethics class taught me anything (and it taught us a significant amount), it is that the academic is an influential person – people listen to, are influenced by, are convinced by professionals generating ideas and arguments. It is imperative that our academies are voices with the marginalized. And this is where, I am convinced, the Latin@ academic resides – at the intersection of real life and real influence.

Activist. Latin@s in the U.S. have a legacy of action fueled by faith and conviction. Articulations of our beliefs about what constitutes a human, what are basic human rights, what is the ethical response to the immigration crisis are necessary. According to Dussel, it is the victims of systems that can most soundly critique the brokenness of that system. As Latin@s, we understand well what foreign policies in our countries of origin have done to our families, our humanity. As informed, conscious, liberated, educated Latin@s rooted in Jesus, it is our “duty” to inform, to give consciousness, to educate, to act.

I close with a quote and a challenge. The quote is from Dr. Mendieta’s paper published in Radical Philosophy in 2011 and an example of how an academic can be an activist. “This paper’s one basic thesis is that the belligerent and shrill anti-immigration rhetoric and politics of exclusion, vilification and criminalization of immigrants is simultaneously a violation of the basic human rights of all human beings and an affront to our democratic morality.”

The challenge is, as an academic and/or activist, to partner with Jesus in his mission “to proclaim good news to the poor…freedom for the prisoners, recovery of sight for the blind, to set the oppressed free, to proclaim the year of the Lord’s favor.” Remembering that the oppressor needs as much liberation as the oppressed. The question is – what will we ethically do with our influence?