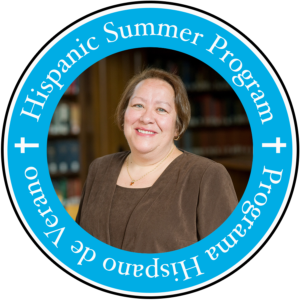 Daisy L. Machado serves as the Executive Director of the Hispanic Summer Program and Professor of American Religious History at Union Theological Seminary. She holds a B.A. from Brooklyn College; an M.S.W. from Hunter College School of Social Work; a Master of Divinity from Union Theological Seminary; and a Ph.D. from the University of Chicago. She is the first U.S. Latina ordained in the Christian Church (Disciples of Christ) in 1981 in the Northeast Region and has served inner city congregations in Brooklyn, Houston, and Fort Worth.

From 1996-1999 Dr. Machado served as the first Director of the Hispanic Theological Initiative a $3.4 million project funded by The Pew Charitable Trusts to increase the presence of Latinx faculty teaching in seminaries, schools of religion, and religion departments around the country. She was also academic dean at Lexington Theological Seminary in Lexington, KY and Union Theological Seminary in NYC. She was the first Latina to serve as academic dean at both schools.

Dr. Machado has also been invited to teach in various schools including as Luce Lecturer in Urban Ministry at Harvard Divinity School, Cambridge, Massachusetts and Lecturer at the University of Texas Southwestern Medical School, Dallas, Texas. She has also been a speaker at numerous conferences in the United States and abroad. She was the first Latina to serve as chaplain for the Summer Season at the Chatauqua Institute where her sermons were heard in the daily chapels with over 600 participants every day.

Her latest publication is Borderland Religion: Ambiguous Practices of Difference and Hope an anthology published in 2019 which she co-edited with Dr. Trygve Wyller (Norway) and Dr. Bryan Turner (Australia) containing essays by a group of international scholars. In this anthology she also has an essay titled “Santa Muerte: A Transgressing Saint Transgresses Borders”. In addition, Dr. Machado has also authored many book chapters on the borderlands, among them: the chapter “History and Latino Identity: Mapping A Past That Leads to Our Future” in The Wiley Blackwell Companion to Latino/a Theology; “Borderlife and the Religious Imagination” in the anthology Religion and Politics; “Voices from Nepantla: Latinas in U.S. Religious History” in Feminist Intercultural Theology; “’El gran avivamiento del ‘33’: The Protestant Missionary Enterprise, Revival, Identity, and Tradition” in Futuring Our Past: Explorations in the Theology of Tradition; “The Southern U.S. Border: Immigration, the Historical Imagination, and Globalization” in Rethinking Economic Globalization; and “La Otra América – The Other America” in A Dream Unfinished: Theological Reflections on America from the Margins. She is also co-editor of the anthology, A Reader in Critical Latina Feminist Theology which contains her essay “The Unnamed Woman: Justice, Feminists, and the Unnamed Woman”. Her first monograph on the issue of the borderlands was Of Borders and Margins: Hispanic Disciples in Texas, 1888-1945.

A native of Cuba, Dr. Machado came to the New York City with her parents at the age of three and though she has lived in many parts of the United States, she is a New Yorker at heart who loves a good bagel and will always make room for a pastrami on rye with mustard. 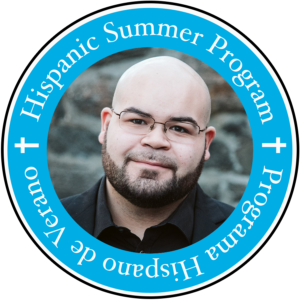 Jorge Juan Rodríguez V is the son of two Puerto Rican migrants who came to the united states a year before he was born. Though his mother was raised in the tall, curvy mountains of Barranquitas, and his father in the humid, bustling streets of Rio Piedras, Jorge grew up with his parents, grandmother, and uncle in a small affordable housing community in urban Manchester, Connecticut.

His story of diaspora, language, gender, race, and disability has propelled his academic journey, leading him to degrees in biblical studies, social theory, and liberation theologies. Dr. Rodríguez completed his Ph.D. in History at Union Theological Seminary.

After six years with the Hispanic Summer Program—starting as a Social Media Intern in 2014 and swiftly moving into grant writing and implementation—Dr. Rodríguez serves the HSP as the Associate Director for Strategic Programming overseeing new initiatives and grants. Dr. Rodríguez lives in New York City with his partner, Ashley, and BerneDoodle, Alfabeto. 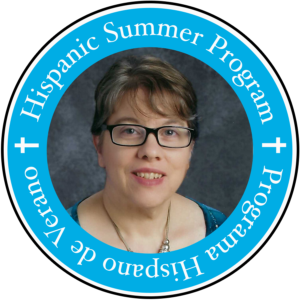 Elizabeth has served as Administrator for the Hispanic Summer Program since 2018. She states that the best part of her job is the opportunity to interact with students, professors and sponsors and help fulfill HSP’s mission to provide theological education for Latinas/os in a context of academic excellence. Elizabeth, her husband, and their son Micah live on campus at Union Theological Seminary where Aliou teaches.